How Forbidden Love Taught Me to Cook Mexican Food 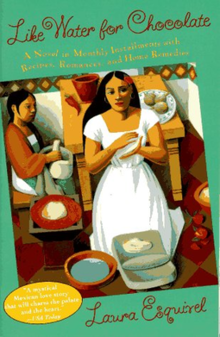 Tradition, jealousy, lust, and dinner recipes, come together as ingredients to a delicious twelve-chapter story of love and ultimately (in my opinion) tragedy in Laura Esquivel’s debut novel Like Water for Chocolate, or Como Agua Para Chocolate when published originally in Spanish.

As the youngest daughter in the de la Garza family, tradition dictates that Josefita “Tita” de la Garza is the one destined to care for her mother, a cold, brute of a woman Tita and her sisters call Mama Elena, until Mama Elena dies. Because of this tradition Tita cannot move out of her mother’s house, she cannot marry, she cannot establish her own life until her mother dies. According to Mama Elena, this tradition has always been in the family and she has no intention of letting Tita be the one to break it.

Forbidden to marry but still a young woman with emotions, Tita falls in love with the handsome and romantic Pedro Muzquiz, much to her mother’s chagrin. In an effort to keep Tita and Pedro from trying to break the tradition that has written Tita’s destiny, Mama Elena allows Pedro to marry Tita’s sister Rosaura in Tita’s place. This arrangement brings forth years of struggle for Tita and the rest of the women in the de la Garza home. Tita must watch the man she loves marry her sister, Rosaura must watch as her husband lusts for her sister right in front of her, and Mama Elena must continue to find ways to keep Tita and Pedro apart.

The story is told in twelve chapters named after the months of the year, starting in January and ending in December. The chapters begin with a recipe for a meal that will appear at some point in the chapter and connects with an event in Tita’s life, such as her sister’s wedding to the man she loves. Born and practically raised in the kitchen, Tita is the best cook in the house; it is through food and the meals she prepares that she is best able to express herself. Being raised by a mother who thought Tita’s opinions didn’t matter, she starts off as a timid, quiet girl. She quickly accepts her fate without putting up much of a fight, knowing that it is completely unfair and ridiculous to condemn someone to a fate such as hers. Soon, however, Tita learns to express herself and become an outspoken, confident woman by using food to convey her emotions, sometimes passing those emotions onto the people who eat her food.

You know how we often say someone “put their foot in it” to mean they cooked a great meal? That’s kind of what Tita does, but with her feelings. Her food is incredible, everyone who tries it loves it. But when she cries over a meal, so do the people who eat it. If she’s overcome with love while preparing a dinner, those who eat it are filled with passion. It’s the perfect way for a voiceless woman to speak up in a situation where she is told she has no right to an opinion. Throughout the course of the book we follow Tita’s tragic love life and her transition into confidence as she fights for the life she deserves and the love she had been denied.

Like Water for Chocolate was such a refreshing read for me, I absolutely adored it! It’s the first book I’ve read by a Mexican author, and one of the few romance novels I’ve ever read (romance has never really been my thing). I didn’t have any expectations going into the book, so the fact that it turned out to be such a unique and interesting story was a real treat. I do believe the ending (I won’t spoil it for you) is supposed to be a happy one, but my interpretation of it was that it was pretty tragic. Without giving too much away, Tita becomes that confident woman, unafraid to speak her mind, but it comes at a pretty great cost. To me that’s more of a sad ending than a happy one, but again, that’s just how I interpreted it. You’ll have to give this book a try yourself and come up with your own conclusions about its ending (conclusions I would love to read about in the comments of this review!).

I love how Esquivel managed to incorporate recipes into the story. All while I read this book I kept thinking, “Are these real recipes? Wow, that sounds delicious. Could I make this? Of course I can make this, she just told me how to make it!” The chapters each start as if they’re cookbooks: a pinch of this, 500 grams of that, mix and bake for three hours. Then Esquivel seamlessly transitions from cookbook into the drama surrounding Tita and her family without skipping a beat; it was perfect, smooth writing.

There wasn’t a lot for me to dislike with this novel. The writing was great, even if a bit too simple in parts. I would have liked more depth to the setting and characters, especially Mama Elena (how does a woman become that bitter and cruel to her own daughter?) but I liked the story so much and was so curious how it would play out in the end that the simplicity of the writing didn’t occur to me until after I finished the book. By then I was so smitten with it I didn’t really care, and it certainly didn’t change the way I felt about the book. The plot itself was unique, albeit heartbreaking at times, and thanks to the recipes I learned how to make meals like chiles in walnut sauce! How delicious does that sound? My mouth is watering just thinking about it!

My only real grievance about the book would be the introduction of Tita and Pedro as being in love with one another. Like I said, romance is not my favorite genre, so it takes a lot of convincing writing for love to seem legitimate to me in books, otherwise I just don’t buy it. Tita and Pedro’s love didn’t make a lot of sense to me; it felt completely rushed and sudden. He looks at Tita and she feels a burning sensation like “dough when it is plunged into boiling oil” and then… the two are in love, I guess. Is that all it takes to fall in love? A piercing look? No build up? No development? No starting as friends and then falling in love? I just don’t buy it! But maybe I just haven’t received a look like that before. Besides, Esquivel was likely going for a love at first sight thing and I’m just too pragmatic to understand how someone could fall in love so suddenly like that. Even if she wasn’t, though, and I just missed the development of their romance, that didn’t take away anything from my overall enjoying of the book. Tita and Pedro could have fallen in love in the most ridiculous way possible, I still would have enjoyed reading the fallout of their forbidden romance.

I went way out of my reading comfort zone with this book, and I’m so glad I did; it’s a great addition to my personal library and it diversified my reading history, both in terms of genre and authors. I’m so happy I gave this one a chance, and I’d definitely recommend you do the same, especially if you’re a fan of romance. Even better, there’s a 1992 film adaptation by the same name on Netflix if you’re interested in watching! I’m sure we all know how movie adaptations can ruin a beloved work of literature, but I enjoyed the movie as much as I enjoyed the book. It stayed true to the plot and the drama of it all and perfectly captured the emotions Tita experiences as a result of her cursed existence.

Like Water for Chocolate has quickly worked its way onto my list of literary favorites for its great balance of romance and tragedy, unique and interesting story line, and for giving me great recipes to replicate someday in my own kitchen.